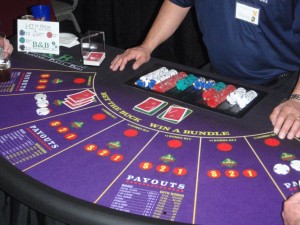 Let It Ride is a variation of five-card stud, based on three player cards and two community cards.

Let It Ride is a casino table game based on poker, where the player wagers on a five-card poker hand formed by their own three cards and two community cards. It is a product of Bally Technologies, under its Shuffle Master brand. The game is played at a relaxed pace relative to other casino card games, which has made it attractive to older players and to table game neophytes. Initially found in many casinos, the popularity of Let It Ride has waned over the past 15 years, because of the large percentage edge the house has on this game. With the standard pay table and optimal strategy, the house edge is 3.51%.[1]